Romanticism is “a shift in emphasis from reason to feeling, from calculation to intuition, and from objective nature to subjective emotion” (Gardner 784), thus indicating a distinct transition from Neoclassicism. Rousseau’s claim that “‘Man is born free but is everywhere in chains!’—the opening line of his Social Contract (1762)—summarizes a fundamental Romantic premise” (784).

Romanticism reflected an attitude, desiring “freedom of thought, of feeling, of action, of worship, of speech, and of taste” (784). Romanticism encompasses several concepts, including nostalgia, Gothic, and exotic. Edmund Burke’s discussion celebrates not the mechanical laws of nature but the mystical, spiritual ways of the natural world.

The rhetoric of seeing the artist as a misunderstood genius began during this time. Escapists went back to the medieval past, valuing the primitive and attempting to get to a Golden Age. There were various national schools (German, Spanish, French, and English) that depicted this revolutionary era of Romanticism.

Spanish artist Goya’s The Sleep of Reason Produces Monsters comes from a series called Los Caprichos, revealing Goya’s “considerable thought about the Enlightenment and the Neoclassical penchant for rationality order” (786) transitioning into Romantic tendencies. Goya is committed to the Romantic spirit of “the unleashing of imagination, emotions, and even nightmares” (786). This print is an etching and aquatint created in 1789. The bended, sleeping figure is a depiction of Goya, where owls (symbolizing folly) and bats (symbolizing ignorance) flock over him. These creatures are menacing and threatening upon the slumbering dreams of the artist. 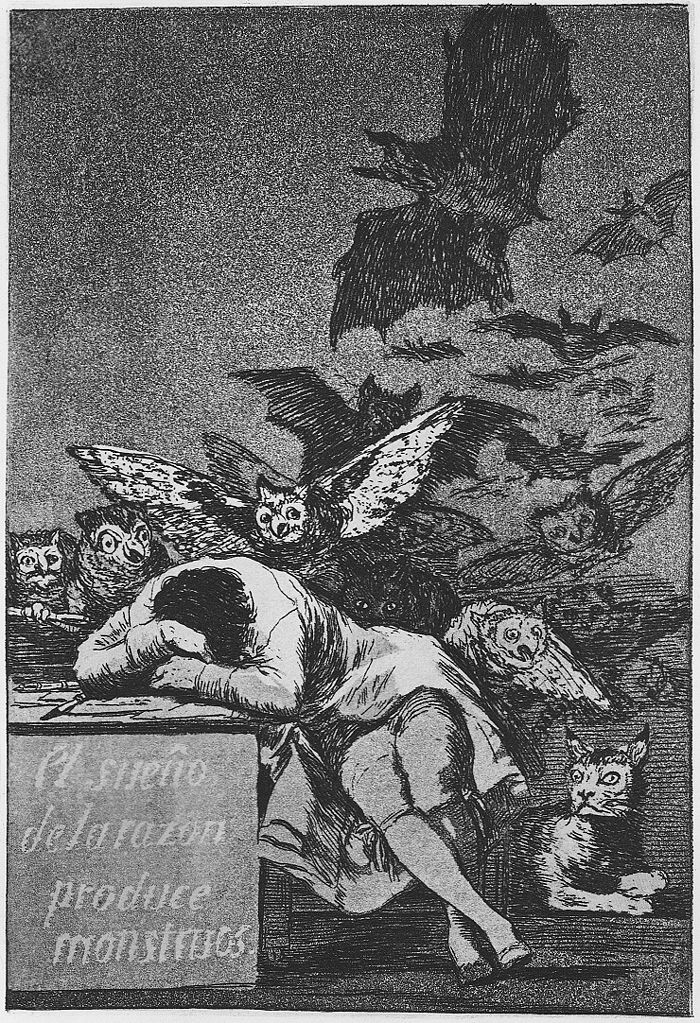 The Sleep of Reason Produces Monsters (image from here)

But Goya’s paintings often show tension or troubling images the artist struggled with internally. Saturn Devouring One of His Children is a fresco Goya painted onto the walls of his home, which were for the artist’s eyes alone and not for any paying patron, thus revealing the emotional carnage of the artist. Goya was going through a personal crisis and health issues, and he lacked faith in humanity, which is reflected in the brutality of the fresco. The bulging eyes scream out to the viewer of anguish, and the thickness of the paint is like tare coming out, which emphasizes the blackness surrounding the emaciated Saturn that seems to engulf almost everything it touches—a living world of nightmares.

Saturn Devouring One of His Children (image from here)

French artist Ingres’s Grande Odalisque shows a “rather strange mixture of artistic allegiances – the combination of precise classical form and Romantic themes” (783). Ingres follows the tradition of the reclining nude, yet “by converting the figure to an odalisque (woman in a Turkish harem, the artist made a strong concession to the contemporary Romantic taste for the exotic” (783). Critics complained the way Ingres painted the nude body, which seemed to lack tone and had a strange flatness about her. Her foreshortened leg and elongation of the back makes the Turkish concubine appear odd. The peacock feathers, the animal skin, the beautiful clasp, the turban, the hookah pipes all suggest an exotic space, a favorite subject for Romantics.

English artist Constable’s The Hay Wain depicts nostalgia. The Industrial Revolution enabled hoards of people moved to cities, increasing the flux of people in a concentrated area. Constable’s work celebrates works and the disappearing landscape. The cottage is unassuming, needing some repairs, yet it is warm and cozy with curling smoke. This picturesque painting shows English value of land, showing the artist’s desire to keep some spaces sacred and out of the hands of industrialists.

The Hay Wain (image from here)

German artist Friedrich’s Abbey in the Oak Forest, 1810, reveals “The reverential mood of this winter scene with the ruins of a Gothic church and cemetery demands the silence appropriate to sacred places” (794). Friedrich, “a master of the Romantic transcendental landscape” (794), painted during a dark time that the Germans were experience occupation by Napoleon. In this bleak moment of the grave-like, dead of winter, the fog is just about the lift along with the rising of the sun. It is as if the dark hour of winter is over, and the season of spring, the promise of regeneration and hope, is on its way at last.

The use of the Gothic abbey in ruins harkens back to another age and time. The similitude of the natural world and the man-made engagement is suggested in the paralleling tracery of the windows where the stain glass has gone out in conjunction with the similar branches and smaller limbs coming out to create graceful patterns, suggesting a continuum between man and nature. Rather than political, Friedrich’s art is more contemplative, considering the inner world and our subjectivity.

Abbey in the Oak Forrest (image from here)